Well, that’s the cleaned up version of what I shouted when we made it to the top of the Schilthorn’s viewing platform last Sunday morning, nearly blown away by a sharp wind and wet snow. It sure wasn’t what it looked like from the “livecam” we surveyed when we began the four gondola journey up from Stechelberg, a short bus ride from Lauterbrunnen. Gui and I climbed down the metal stairs to check out the “Walk of Fame” area with plaques about actors from the James Bond movie filmed on the mountain — On Her Majesty’s Secret Service for fans, which is featured prominently in the merchandising. On the way, we passed the only other group crazy enough to climb down in that weather, who were making their return to the platform. “It was worth it… not,” an older gentleman declared.

Yeah, it definitely wasn’t worth it. The wind blew the snow directly into our faces as we carefully maneuvered on the icy rocks and we retreated after a few minutes to seek shelter in the cafeteria. We were just about to accept full defeat and take the gondolas back down the mountain when I glanced out the window and saw that the sun had appeared. We hustled back outside and watched the clouds clear away from the mountains, taking the snow with it, in awe of the peaks that had been completely hidden from view just 10 minutes earlier. 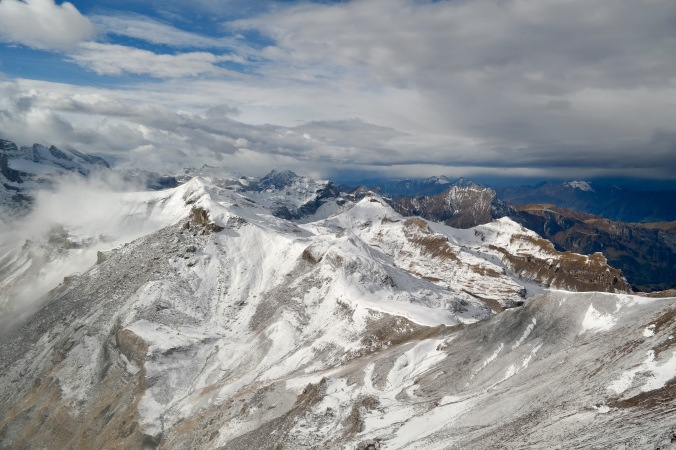 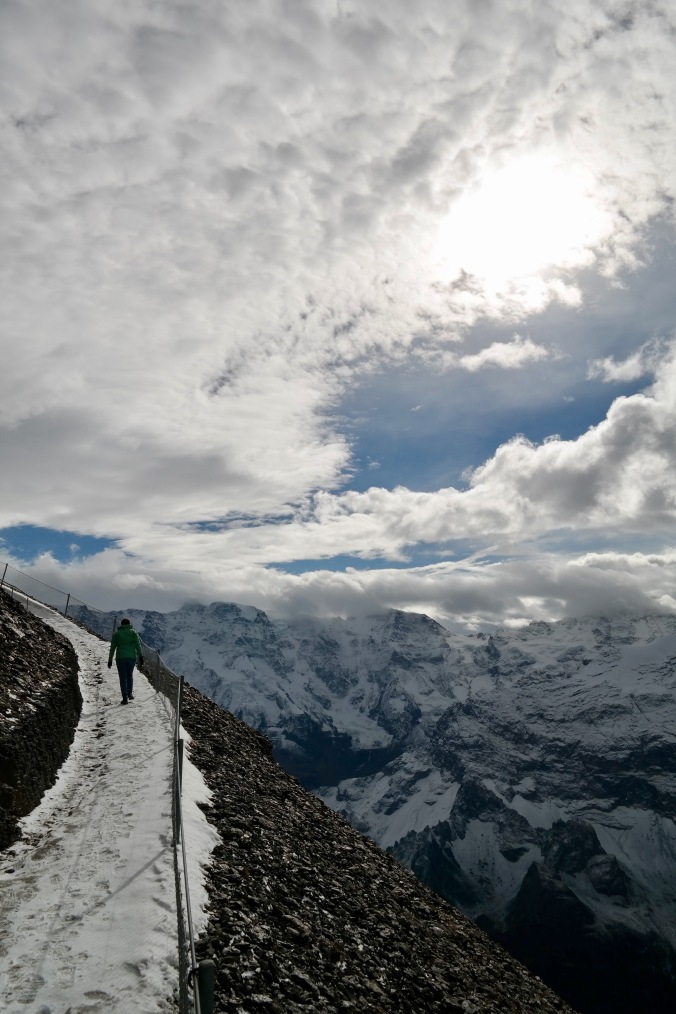 After taking in the view, we rode the gondola partially down the mountain to Birg to try out the new “Thrill Walk.” The pictures look terrifying — and Gui was no fan of the suspended wire tunnel — but for some reason I wasn’t really that scared. Perhaps it was Gui’s words that comforted me: “It’s Swiss made, so it’s totally safe.” Afterward, we took another gondola to the picturesque Swiss mountain town of Mürren before heading back to Lauterbrunnen (the last two photos) for a late lunch and our train to Geneva.

A few tips: Gondola tickets can be quite pricey — more than 100 CHF a person for the Schilthorn — so make sure you bring your half-fare card if you’re a resident of Switzerland. Better yet, if you bank at UBS, there’s a promotion right now that allows cardholders to ride up selected mountains for 10 CHF — an unbelievable deal that we were happy to take advantage of 🙂 FYI, the rotating mountain-top restaurant featured in the Bond movie is closed for renovations right now, so you might want to hold off on your visit if that’s something you care about (we didn’t). Oh, and I was a bit worried about altitude sickness because this was the highest I’ve been yet, but we were both totally fine. Be brave! 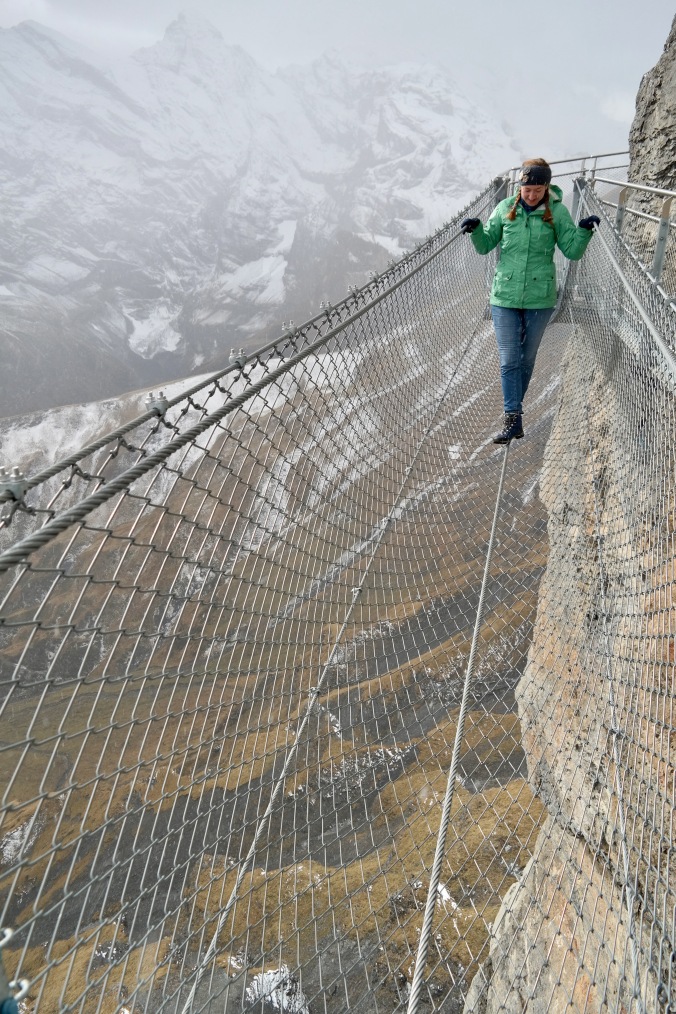 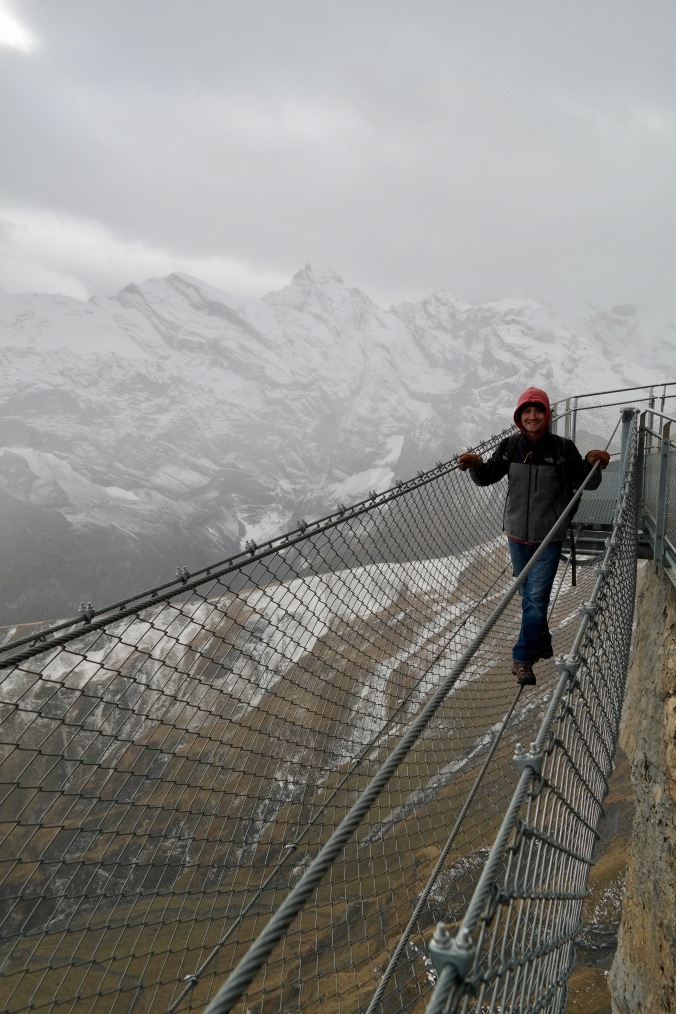 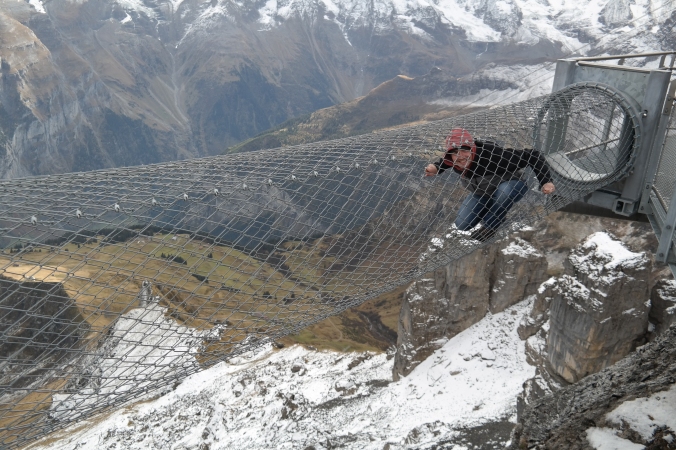